The Chairman of HTOO Group of Companies (HGC) and its staff donated 40,000,000 MMK to Venerable Monk U ThuSitta, MawKyun Sa Ya Taw, for implementing road and bridge project at Sitta Thukha Monastery, Tha Ya Kone village, Mawlamyine Kyun Township, Irrawaddy Division, on July 2, 2020.

The Venerable Monk U ThuSitta is a leading organizer in this road and bridge project, which is long over 2 miles, from the Monastery of Tha Ya Kone village to the road of Mawlayine Kyun Township. For the time being, the road was finished only half a mile and the HGC had taken the responsibility to complete the project, which will cost 40,000,000 MMK. The previous road was so terrible and vehicles could not drive during the rainy season.

It was so bumpy and much muddy wilderness. Therefore, the students had to pass through the muddy wilderness during the schooling season. Moreover, some person who is seriously ill and in critical condition lost their lives, passing through this bad unbearable route.

That is why we had decided to build the road said the venerable monk. The Buddha revealed six kinds of donations, which are eternal meritorious deeds in vanaropasutta, which is stated as follows; “If someone cultivates flora, garden and woods trees.

He also builds roads and bridges. Moreover, he contributes to drinking water pot and water well. He also donates monastery.

At the mind of the man who donates one of the mentioned donations, increases meritorious deeds all the time. He will have standing in the stream of Dharma.

He can be said that all the good moralities are fulfilled in his mind. He will be reborn at celestial abode, after passing away.” The venerable monk U ThuSitta lost his parents and siblings in Nargis Cyclone tragedy, what was happened on May 2, 2008, while he was studying the Buddha literature at Sri Lanka.

Now, the monk is teaching all the Buddhist wisdom to the children at the monastery and nearby villages. You had to pass four villages from Malamyine Kyun Township to get the Sitta Thukha monastery, in Tha Ya Kone village. Soon, this route will be replaced by a good quality concrete road.

The villages from the Tha Ya Kone, Kampyam, Pu Ti Yoe, and Gyi Ta Pin villages are very happy for the donation of HGC. The benefits of contributing road and bridge are tremendous and it definitely generates advantages either praying or not.

Moreover, this meritorious deed brings the doer to the enlightenment of Nirvana and its path of purification. The HTOO Group of Companies would like to express our happiness for we had a chance to contribute to the place which is needed indeed.

HTOO Group of Companies donates two Bioscience Axceed 260 Immunoassay machines and reagents for use in antibody screening for COVID-19, which sufficient for checking 10000 persons, totally valued in cash over 3000 Lakh MMK, to office of Director of Army medical service 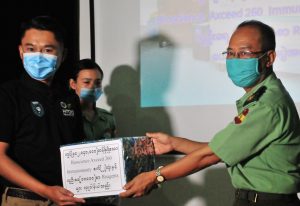 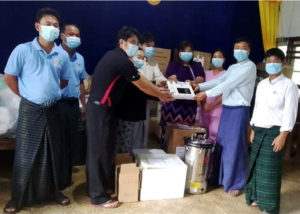